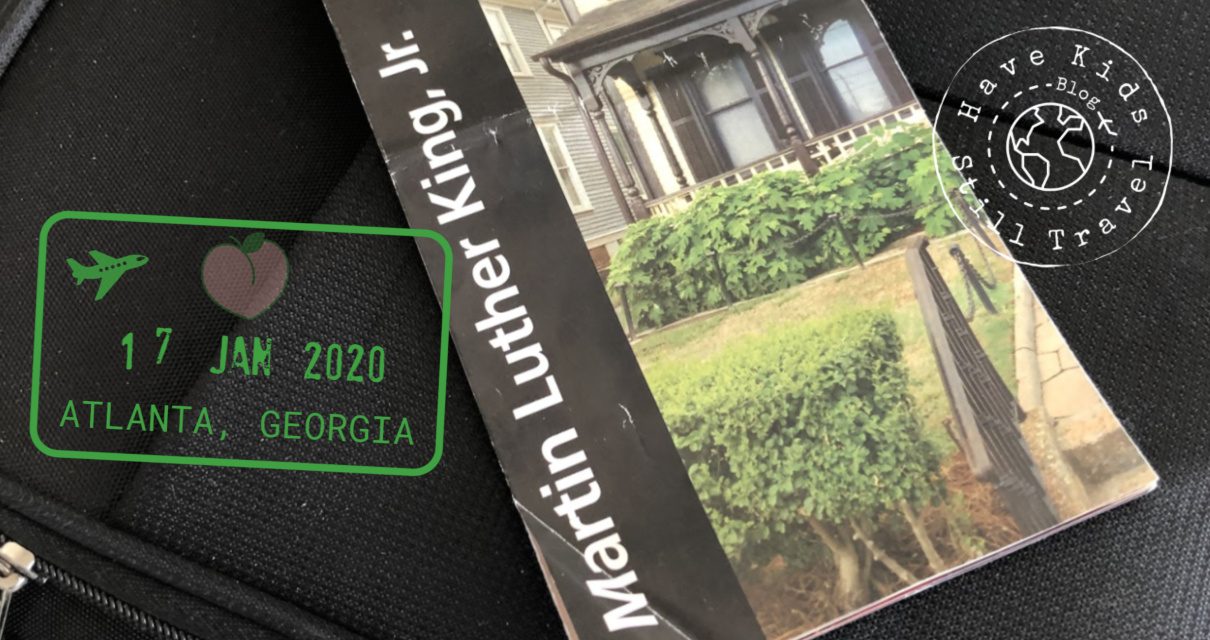 On our latest adventure (and attempt at authentic educational experiences), we discovered that even if you’re only able to explore a site for the briefest of moments, you’ll still walk away having learned something.

Monday, January 20, 2020, was Martin Luther King Jr. Day in the United States, a day that honors him, his birthday (on January 15, 1929) and his involvement in the Civil Rights Movement. Students in the U.S. usually learn about Dr. Martin Luther King, Jr., his famous “I Have A Dream” speech (See this Newsweek article, “Martin Luther King Jr. ‘I Have a Dream’ Speech Full Text and Video,” by Jenni Fink), and his advocacy of nonviolent protest and activism, through books and informational videos; however, our family decided to take it a step further by traveling to his place of birth (and mine), Atlanta, Georgia.

When planning our trip to Atlanta, we had multiple goals in mind, Martin Luther King, Jr. National Historic Park being the first. As part of the National Park Service, it is free to visit the site, and there are multiple points of interest including the Visitor Center (where one can explore more about Dr. King, segregation, the Civil Rights Movement), Dr. King’s Birth Home, The King Center (where his tomb is located), and Ebenezer Baptist Church (where he was baptized and later became a pastor). Though I visited the site on a field trip when I was younger, I could recall only his tomb; so, I was eager to see and learn more as well as share the experience, the information and the sights with my husband and our children.

As we stepped out of the car on that chilly, overcast Friday morning, Miss V immediately complained that her belly was hurting. Though able to pose for a photo or two, she continued to show the signs (and emit her whines) of discomfort even after getting out of the cold and into the Visitor Center.

Now, we had arrived at that parental decision-making moment that we’re all likely familiar with: Assume it’s a minor issue and continue exploring, or err on the side of caution and remove her from the crowded exhibit space in case vomiting ensues. We chose the latter, and while Mr. V took her outside, Mac and I perused the exhibits a bit more.

The exhibits in the Visitor Center, including videos featuring words considered taboo today, were blunt depictions of the times. While these exhibits may bring about uncomfortable feelings, such as sadness, pain, or even anger in viewers, they also generate questions and conversations that lead to learning.

In an area meant for children to explore, an old, worn ball informs and reminds us that there was a time when the United States was segregated. A time not only when blacks and whites had to use separate water fountains and go to separate schools, but also when their children were not allowed to play together. My son is baffled and annoyed by this idea of dividing people based on skin color or ethnicity.

As we enter another room, we see an excerpt of a letter Dr. King wrote from an Alabama jail. It dominates the wall behind a microphone-clad podium and recalls the lack of rights given to, as well as the inhumane treatment of and brutalities committed against, people of color in the United States. Reading this, I’m reminded of the book I read to my students, Martin’s Big Words: The Life of Dr. Martin Luther King, Jr., by Doreen Rappaport, and the power that one’s words can have, and more importantly, the power that Dr. King’s words had on the nation and the effect they still have on us today.

Mac and I make our way around the room, viewing the various objects and photos before making it around to the central part of the exhibit, titled “Freedom Road.” It consists of people, sculptures, marching up an inclined road. At the end are some more of Dr. King’s powerful words, and I have my son read them:

“Every man must decide whether he will walk in the light of creative altruism or in the darkness of destructive selfishness. This is the judgment. Life’s most persistent and urgent question is, ‘What are you doing for others?’ — Martin Luther King, Jr.”

He struggles with some of the words (and their meaning), but the basic message is not lost. Then, I ask him why he thinks the the faces of the statues marching look upset. “I don’t think they look upset,” he says. “They look like they’re thinking.” I offer the term, “determined,” and after a moment of contemplation, he agrees. Kids are so wonderful at processing nonverbal cues, and whoever sculpted these figures did an amazing job establishing the emotion in their faces.

As we begin to discuss why they were marching, my phone vibrates, indicating a call, and Mr. V informs me that while she hasn’t vomited, Miss V’s condition has failed to improve; so, Mac and I have to cut our visit short.

We may have barely scratched the surface of the Martin Luther King, Jr. National Historic Park, and my educational vision may not have been completely fulfilled, but at least a little bit of learning happened, and as usual, we’ve left ourselves with more than one reason to return.

Why Do We Travel?