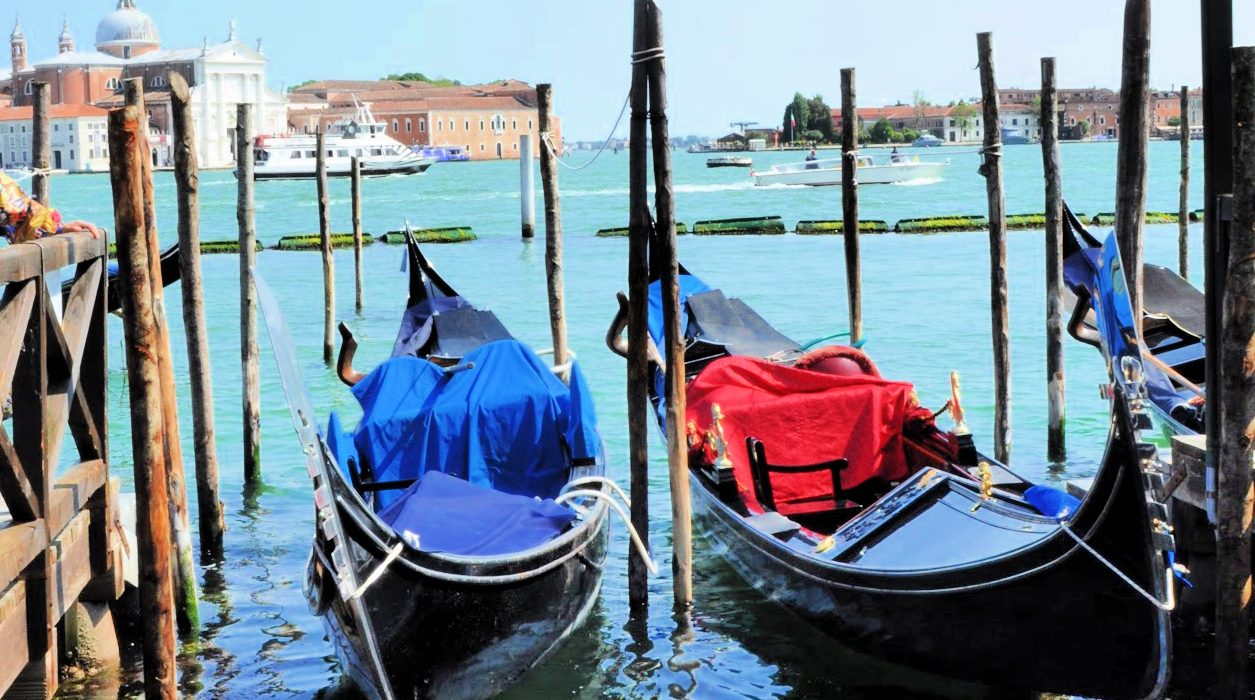 The first time I visited Venice, it was in August of 1999. I was in my early 20s, not long out of college, and I stopped there for a day or so with my tour group. What imprinted on my young brain were the colorful buildings, flowers bursting from window boxes, our Fabio-like gondolier, an incredible mask shop, crowded bridges, a labyrinth of alleyways, and the fear that I would undoubtedly get lost if I strayed too far.

Aside from any fleeting anxieties, I, like so many before and since, fell in love with Venice. Her beauty, charm, and alluring mystique made it simply impossible not to adore her, and one day with her was simply not enough. Clearly, I would have to return.

It may have taken nearly two decades, and maybe just a little convincing of Mr. V, but I made my way back to see her, to fall in love with her yet again. Twice, actually. My first visit was this past May with the family, and the second was early last November, just prior to the massive flooding, when I stole away for a much-needed Momcation (which I will elaborate on in a future post).

Venice, with its vast canal network, bridges, art, architecture, and rich history, is unarguably one of the most unique places in the world. It’s a must-see destination in my mind, and judging from the mass amounts of tourists that visit every year, I am not alone in this opinion. The over 100 islands that comprise Venice, including the islands of Murano and Burano, beg to be seen again and again (or maybe just if you missed something the first time).

The City. My Love.

On a sunny day, the city of Venice is at her best. Architecturally marvelous buildings, weathered by time and tides, rise out of the milky aquamarine waters that weave through her canals. The soft sounds of small, lapping, lagoon waves are temporarily broken by the buzzing and chatter brought in by streams of passing tourists. The water buses (s. vaporetto; pl. vaporetti) rumble and whir as they come to pause at floating stations, letting passengers off and on, while seagulls float on the breeze overhead and pigeons waddle around the piazza. The gold accents, marble columns, and colorful mosaics, on and around St. Mark’s Basilica can be admired by all who care to stop and look, as can the windows of the luxury shops, like Gucci, Ferragamo, and Dolce & Gabbana, lining the nearby Calle Larga XXII Marzo. Venice is simply stunning in this light, and what better way to toast to her than by relaxing and enjoying the view with a Prosecco or Bellini in hand at an outdoor cafe.

Even on a rainy day this already wet city has her charms. The cloudy canals and muted tones of buildings and walkways add to the gray, dreariness of the day, but bright flowers still rest in window boxes, and there’s still an overall liveliness. Locals are dressed in their finest rain boots, getting their shopping done and carting their items home aboard the vaporetti. Confused tourists in plastic ponchos and boots try to figure out where to go and what to do, crowding water bus stops and frustrating the locals who are just trying to go about their day. Restaurants along the Grand Canal keep a close eye on rising tides as water begins to creep over the edge and under the chairs. Alleyways and tourist shops are notably less crowded, though, making it a great time to peruse for souvenirs and a fine time to find a restaurant with a covered patio where you can stop and enjoy a treat.

As with any love affair, eventually the rose-colored glasses come off, we become more familiar, and we begin to see the reality behind the facade. That’s when the real bonding begins. In fact, I think that it would be fair to say that I now have a proper relationship with Venice rather than just a budding romance. I’ve gotten to know her a bit more, including her fleeting bouts of odorous intestinal upset, and though there’s still more to discover, I love her as she is.

The city, while still peppered with natives and locals, is a tourist city, and with that comes the typical traps. The piazzas and side alleys are lined with numerous restaurants catering to the crowds and commanding higher prices (or cheap food). There are numerous souvenir shops and stalls with sometimes pushy sales personnel, and also loads of people floating through some areas like herded cattle, divided only by the occasional aggressive tour guide leading her flock through the city on a time crunch.

She is also a walking city, and while her architecture, quaintness, and beauty amaze and abound, it also seems to imitate itself throughout: Bridge, canal, small boat, alley, brief whiff of methane, heavy wooden shutters open and flowery window boxes overhead, lovely wooden door, cobbled piazza, fountain, tourist shop, tourist restaurant, gondola, and repeat… You can, and no doubt will, get virtually the same picture in twenty different spots around Venice, or even the same spot you’ve past numerous times because you’re lost and walking in circles as I have been known to do. But sometimes, breaking up the repetition, and providing some fuel for your continued quest to locate your hotel again, you will discover a nice little local cafe or osteria tucked away near a small piazza.

Yet, despite her eventual mundanity, crowded piazzas, countless tourists, and occasional malodorous emissions, Venice is one of my favorite cities in the world because while not unique within itself, it is unique unto itself.

Venice, Italy — Part III: More of the Family Affair — Our Firsts in Arrival, Lodging and Meals